With the prospects of an economic bounce back – the ‘V’-shaped recession many had hoped for – starting to look less likely, the UK and its Chancellor Rishi Sunak need measures to revive the economy. One tool, announced on 8th July, is to cut Value-Added Tax, the UK’s principal sales tax. The standard rate of VAT will drop from 20% to 5%, with the reduction lasting from 15th July to mid-January 2021. It is a focused cut, applying to the hospitality sector. Some welcomed the policy, and there is talk of more VAT changes in the autumn. On the other hand, there are concerns. For example, as set out in The Guardian, that the policy will waste resources - the worry is that firms will ‘pocket the difference’ and not pass on the tax cut to their customers in the form of lower prices. So is this a good policy, or would fiscal firepower be better directed elsewhere?

Using firm level price data and a quick ‘event study’ type analysis I found some support for Mr Sunak’s policy: in 2008 UK firms did pass on tax cuts quickly by lowering their prices. Yet there is good reason for The Guardian’s worry too: some firms cut prices before then seeking to recoup revenues by quickly ratcheting prices back up.

Investigating the micro data used by the Office for National Statistics (ONS) in constructing its aggregate Consumer Price Index (CPI) is one way to look at whether step changes in sales taxes are passed on to consumers. In the UK, the ONS puts together a collection of ‘price quotes’ on items sold in shops across the British regions – these are then aggregated up into our official measures of inflation. The underlying quotes are helpful since it allows us to compare products sold in the same shop month on month and track how many prices rise, fall and stay the same during recent VAT step changes.

Recent history provides us with some key period to examine. UK retailers and consumers experienced step changes in VAT during the GFC and its aftermath. In December 2008 VAT was cut from 17.5% to 15% as part of crisis-response stimulus measures. Then 13 months later, as part of deficit-reduction measures it was increased back to 17.5% (January 2010). A year later it rose again to 20% (January 2011). While none of these shifts is as large as the one the Chancellor has announced they provide interesting case studies.

What does other countries’ experience say we expect to see in the UK data? The most relevant study in which economists have looked at sales tax pass through is Karadi and Reiff (2015). The authors examine Hungarian data across 123 stores (focussing on processed foods) and find that prices are flexible, i.e. tax shocks are passed on, but are asymmetric in responses to VAT changes. In particular, they find evidence that would substantiate the concern set out in the Guardian article cited above. The authors note:

The questions, then, are flexibility and symmetry. Do prices change – and is it the same for tax cuts and hikes? To get a rough answer for the UK I took the CPI micro data and looked at 9-month windows either side of the shifts set out above. I tracked known items and whether prices changed month on month, plotting the proportion of prices that had (a) risen and (b) fallen. The result of this crude ‘event study’ approach is the pair of charts below. 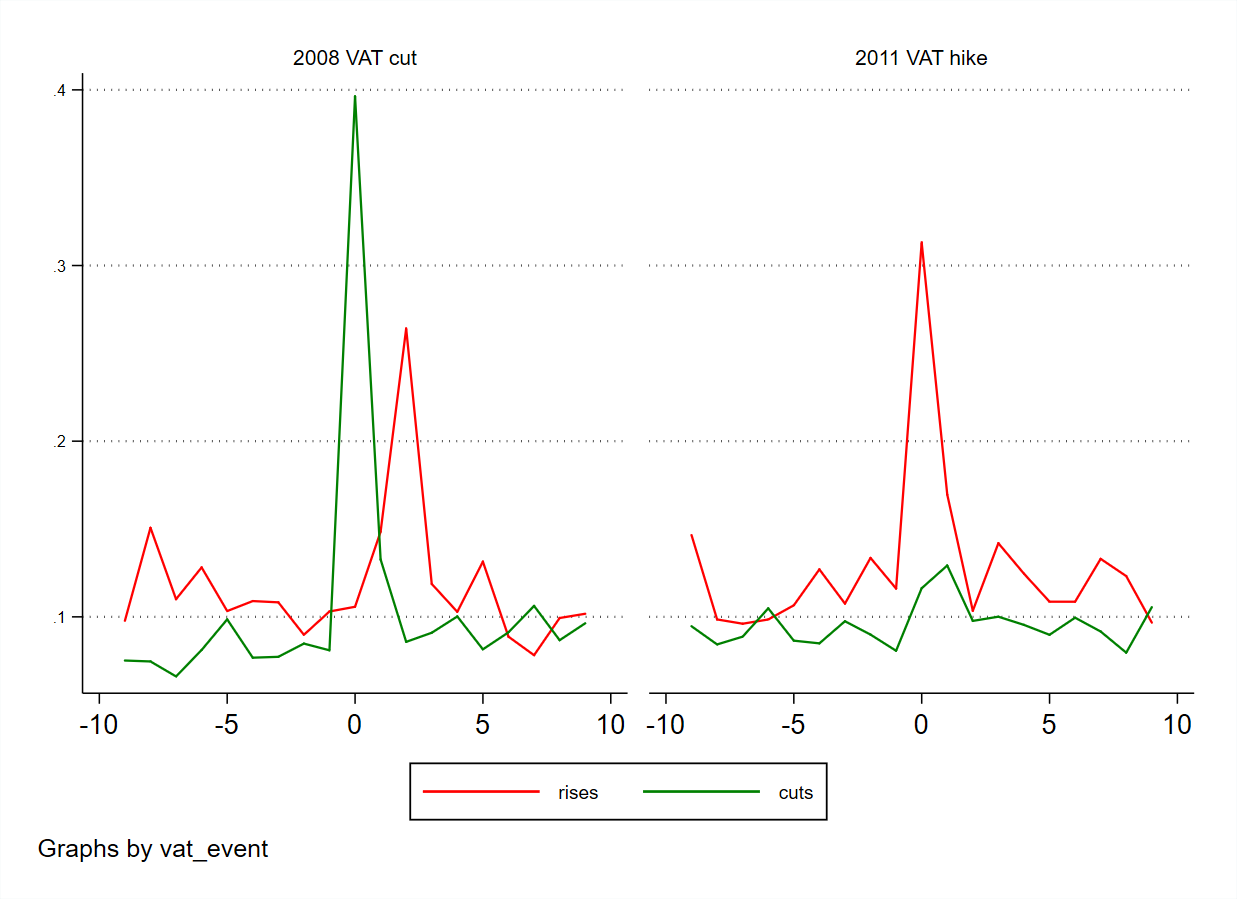 The UK chart seems to show something slightly different to the Hungarian study. In terms of the initial reaction, things look flexible and (initially) symmetric – that is in both cases we see the tax change, and a spike in the number of prices changing follows. The direction of the price changes is as we would predict: cut taxes and prices fall, raise them and prices rise. If lower consumer prices is the Treasury’s aims with this policy, then this initial response is cause for optimism.

The wrinkle in the story is what happened 2-3 months after the 2008 VAT cut (left hand panel in the chart above). An unusual number of prices rose. I’m not sure why this is, but I suspect that, in a time of crisis, firms do not want to be seen to be hoarding the returns from a sales tax cut. That is there is both moral and economic pressure to cut prices, even though this takes firms away from their target price. Some firms may pass the cut on, only to quietly raise prices in following months to get back to their target price.

In conclusion, the literature tells us we should not expect VAT cuts to be fully passed on. And UK micro data tells us the full effect cannot be judged in the first month’s reaction.

A final thought is whether firms ‘pocketing’ the tax reduction would mean that this policy is a failure. If all firms do this then there would be no reduction in prices, and no corresponding rise in the real wage. As a result, we would not expect a direct boost to household consumption, which is by far the largest component of GDP in the UK.

This does not mean the money is wasted or the policy is a failure. The corporate sector has been hit hard by the Covid-19 recession, and a sales tax cut is a step that allows firms to increase margins (since for a given sale, they hold on to more of the revenue as their VAT bill drops). Of course, there will be big distributional effects, some of them unintended, but support for firms should ultimately support employment and wages, investment or dividends – all of which indirectly help British households. Those concerned about distribution should remember that this kind of tax is, in general, regressive – see the Mirrlees Review for the detail.

So, should the Chancellor use this lever? Yes. And if anything, he should be bolder (make the cut more generous, apply to more industries, or last longer). As I have argued elsewhere (see the discussion at Coronanomics with Miatta Fahnbulleh, Lizzy Burden and Ben Chu) this is not an ordinary crisis, and extreme times call for extreme measures. A VAT cut is certainly a blunt policy tool but tinkering to perfect policy is a task for calmer times. The UK fiscal position is sound. Cutting VAT will help households and/or firms in one way or another. It is a policy all economists should support.