There are two schools of thought when it comes to rich-world interest rates in 2015. Some reckon that, after such a long period stuck to the floor, rates must rise as growth returns and unemployment falls; others warn more pessimistically that economies can stagnate and get stuck in low-rate ruts. Both camps will be proved right. Central banks, starting with the Federal Reserve, will start to lift rates. Yet far from signalling a return to normality, this will herald a new split within the rich-country g7 group, pointing to divergent paths in 2015 and beyond.

Interest rates have never been so low, or held steady for so long. To see how unusual the past six years have been, take the two countries hit hardest by the first phase of the banking crisis. In Britain the 100 years before the crash of 2008 had 370 interest-rate changes, almost one every quarter. Yet since falling to 0.5% in 2009 the Bank of England’s rate has not budged. America’s Federal Reserve has held its rate for six years, unheard of outside the Depression era. Across the rich world the pattern is similar: rates have hit the floor, and stayed there.

Yet it would be wrong to conclude that whatever goes down must eventually come up. History offers an exception: Japan. There the stockmarket crash of 1989 led to a deep recession. Since 1996 the Bank of Japan’s interest rates have not been above 1%. Easy money has not led to runaway prices: inflation has averaged less than 0.5% a year since the crash, with house prices falling every year between 1991 and 2005. Growth pessimists, including Larry Summers of Harvard University, reckon a new phase of “secular stagnation” (low growth, low inflation, low interest rates), akin to Japan’s malaise, might infect the West at large.

To spot which view is right, and get an early hint of rate rises in 2015, savvy investors should study labour markets even more closely than growth and inflation. In America, unemployment, which peaked at 10% in 2009, has dipped below 6%. With further falls on the horizon, joblessness will edge towards the 5.5% level at which the Federal Reserve reckons wage and price pressure will start to build. America’s central bank will lead the G7, lifting its rate first.

Many will expect the Bank of England to follow suit quickly (indeed, some expect it to move first, see chart). But though 2014 has been good, with sustained growth and falling unemployment, the bank will proceed more slowly. In Britain rate rises are likely only when joblessness falls to 5% or so. That will require roughly 350,000 unemployed Britons to find work. Even if jobs keep being created at a fairly rapid pace, this may not happen until after the general election in May. A huge productivity gap also suggests that it will take longer in Britain for wage pressure to build up. 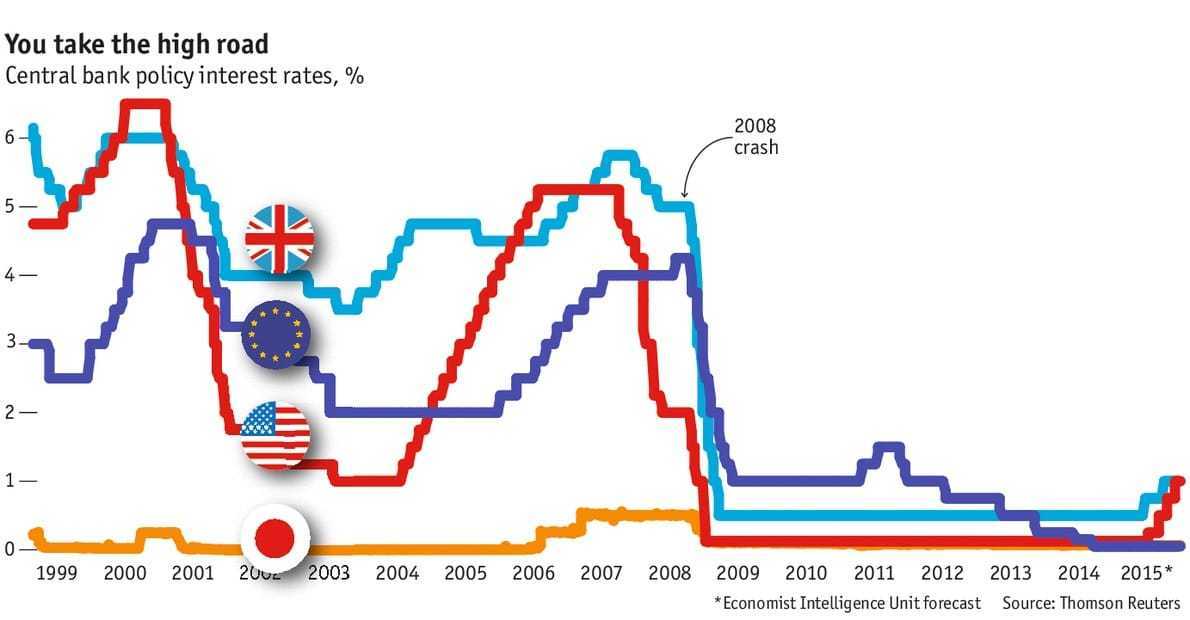 Developments overseas will help put a lid on British inflation. Across the European Union there are 25m unemployed. British policymakers will realise they need to take this pool of untapped labour—able and in many cases willing to move to Britain—into account.

The European Central Bank (ECB) will not raise rates in 2015. Among the euro-zone countries Italy will remain the most acute concern, with a risk that its government debt, which accounts for a quarter of the euro zone’s bonds, gets downgraded to “BBB-”, just a sliver away from junk status, by Standard & Poor’s, a ratings agency. Worries about France will grow. Its economy will be tested by President François Hollande’s three-year plan to cut €50 billion ($63 billion) in government spending while offering €40 billion in tax reductions. It is a sensible long-run aim. But the combination of tighter credit conditions, as French banks charge more to households and firms, and tightening fiscal policy bodes ill for 2015.

For Japan 2015 will be a knife-edge year. Like the ECB the Bank of Japan will remain in loosening mode throughout the year. That should support growth, and inflation. But a sales-tax rise baked in for October 2015 (from 8% to 10%) will create fear as the year progresses; the previous jump (from 5% to 8%) caused a sharp contraction of the country’s economy in 2014.

Overall, 2015 will be a twin-track year. Even on the high road taken by America and Britain, rates will not rise far. And there will be grumbles: in America about the vast swathes of workers that have given up, becoming “inactive”, and in Britain about low wages. But those on the low road have far more to worry about. There is a real risk that Japan will stall, with those in the euro zone starting to look at the Japanese example as a guide to their future.